HHCF After School Program is BACK at O'Connell High in SF!! 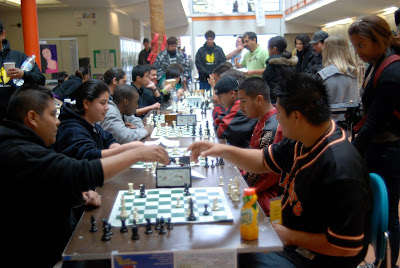 The O'Connell High kids HHCF after school program was on hold. Now we're back!!
Last year, the HHCF took a hard blow. There was not enough money for us to really be fully functional at John OConnell. But this year, we're baaaaack!! Yesterday was the first day. I cannot tell you how cool it was to watch street kids, nerds, lady hustlers and jocks all at the tables playing. Much props to the ladies on the boards! We have a LOT of new girls who smash dudes with a queens wisdom. Thanks to Timberland Boots, most of the kids will be getting new shoes within the next few days.

Our program will be more than just chess. We will be giving the kids basic chess lessons, show them various movies that encourage them to make new decisions and talk about the positive life strategies found inside Hip-Hop music. Songs like Sabac Reds, The Commitment:


But my people we need you! If you are a chess player, a rapper, graff writer, DJ, b-boy/b-girl or martial artist- WE NEED YOU. The HHCF needs you to come through and talk to the kids about some of the best and worst decisions you've made. We need your wisdom, your compassion, your laughter and advice. Then, play some casual games, or, let some of the kids teach you how to play chess as a thank you for spending some time with us. SERIOUS INQUIRES REACH OUT AT: bishop@hiphopchessfederation.org !
at August 26, 2010 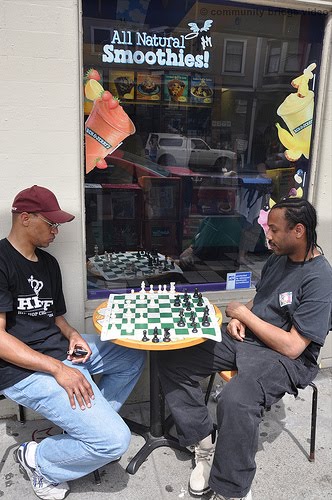 The first time I stole, I was about 8. I went to a gumball machine that had lil toys in it. It was broken, so, when you turned the knob without putting a quarter in- it still gave you a toy. I got a fake piece of buttered bread. It looked real though. I’d offer it to people on plates and people would think it was real. It made people laugh, but, I never laughed as hard because I knew I never paid for it. I knew my parents taught me better. Even without my parents, something instinctual told me it was wrong. I eventually threw it away.

I didn't steal again for about 8 years. One of my first teen gigs in the 80’s was at Chess King (ironic ain’t it?). If you were remotely cool in the 80’s Chess King was one of the best places to shop. Some of the people I worked with stole clothes all the time, but, I didn’t . I mean, we worked here, so we got a discount (plus I thought I was wrong and I was scared to do it).

But after I left Chess King, I went to work at a store that sold jeans. So many people stole there it made your head spin. They had elaborate ways of having friends come in, buy one pair of jeans, but we’d have seven pairs of jeans prepped in another bag that they’d walk out with.  After work, we’d split all the jeans in the parking lot and go home. This was before a lot of stores had cameras. So, it was done frequently.

After working in the mall for a while you get to know other kids at other stores. So, they steal from shoes for you. You return the favor by snatching some shirts and stuff for them. Everybody is happy right? Wrong.

The thing is, despite never being caught, no matter how cool the clothes were- I never felt good in them. Just like the fake piece of bread when I was kid, I knew better than to take something I didn’t earn.

That Christmas season, a bunch of my friends and I got over on a ton of clothes. A few weeks later, things got tense. Some people  got busted. If you take more than five hundred dollars of a product, its grand theft! I’m not prison material. I was shook, but I kept quiet. Some folks went to jail. I never did. Now I even felt worse walking around in these clothes I knew I had no business stealing.

After that, I stopped taking things I knew did not belong to me. It was that easy. I chose the better path. Sometimes life was tough and I had real opportunities to come up on stuff that I wanted. Other times, I had a shot at taking stuff that I really needed, but could not afford.

A few days after boxing legend Muhammad Ali won his historic match against George Foreman in The Rumble in the Jungle, he gave a speech to African heads of state. He told them that one thing the African people at that time had, that the African Americans had lost was the ability to keep their dignity in their poverty. Meaning they did not let their poverty be an excuse for poor behavior and bad morals.

Today everybody is using poverty and this recession as the reason they use or sell drugs, steal, stay high and drunk- or worse. I’ve watched many of my friends over the years sell weed, cocaine, steal cars all kinds of things. One of two things  unfolded for them. They woke up and changed, or they stayed with it and paid a price (prison, addiction or death). I understand the pain of poverty and the confusion it can cause. But we must be stronger than situation before us. Sometimes, you win in chess, just by holding your position. Making erratic moves on the board means you lose. It may not be the best time to try and move forward, but do not move back on inch. Hold your ground! There will always be pressure from somewhere. How you respond to pressure is what separates the champions from the chumps. I once heard RZA from Wu-Tang say “Cash rules everything around me, but it doesn't rule me”. That's holding your ground.

Today I’d rather sit in front of you in some old jeans and a t-shirt that are mine, than in a new suit that I took. I’d rather walk around in shoes that are worn out, than shoes that I stole.  I figured out how to have a recession proof soul.
at August 22, 2010

American Education Is Failing...We need to fix this...

People really did not see what we were talking about in the beginning. Now videos are popping up all over the place. The path and the aim of jiu jitsu and chess is the same. Much respect to my friend David Balicki from Heroes Martial Arts in San Jose, who sent this to me!!! Even Ray Charles can see the connections now. Join the movement! Pick up a chessboard, get on the mat and train with your friends, learn, walk the earth in peace to dope beats. 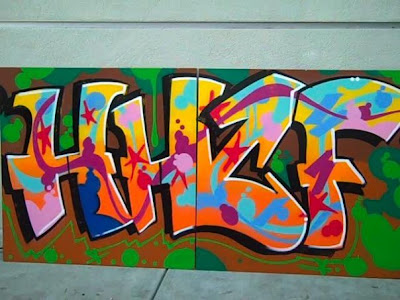 We love graffiti art and we support all the men and women who put their souls on the wall for the world to see. We believe that graffiti art is the visual language of the streets and we support its elevation and preservation. Hip-Hop artists from Eric B & Rakim, Fat Joe, Wu-Tang Clan, Pharcyde, Dilated Peoples and tons of others participate in or support graff.  People used to say it wasn't even art. Today graffiti is used by global clothing, food, technology and entertainment brands across the planet. Its impact cannot be ignored.This contest is an attempt to help young artists showcase their skills and help them share it with the world.
BE CLEAR: We do not support vandalizing other peoples public or private property. Nor do we support people using graff to intimidate or threaten. 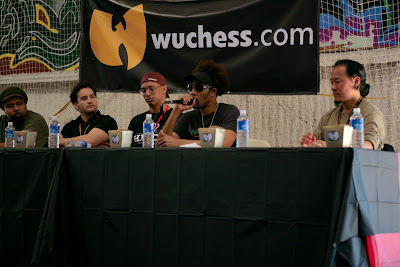 Rakaa from Dilated Peoples, Josh Waitzkin, Adisa Banjoko, RZA & Gene Ching talk chess and life strategies.
We love graffiti art and we support the men and women who put their souls on the wall for the world to see. We believe that graffiti art is the visual language of the streets and we support its preservation.

That said, the Hip-Hop Chess Federation is proud to announce the 1st HHCF Graff Contest. To participate do the following:

2. Take a photo of it or scan it and email to: bishop@hiphopchessfederation.org

We will post as many as we can (we can't promise to post them all) here on this blog!

Then 5 finalists will have their submissions posted up and people can VOTE on their favorite "tag" or "throw up".

The HHCF wants you to express yourself!! LIVE OUT LOUD!

Jrobi breaks down the Sicilian Dragon!

US Open for Brazilian Jiu Jitsu is Coming!

Hey, I think its great that the new commercial for the US Open has chess in it. But now, why not connect with the org that promoted this connection the most (HINT)....I know some of their money goes to charity (and the HHCF could use some help!). If you have never seen a jiu jitsu tournament, THIS IS THE EVENT TO BE AT!!! Family friendly, lots of folks from around the world- close to the boardwalk! Come on down....See you on the mats!
at August 07, 2010

Rakaa Iriscience from Dilated Peoples just released his first solo LP, Crown of Thorns. On it, you'll find Hip-Hop Chess Federation Founder Adisa Banjoko talking about how chess strategies are connected to life strategies. Go get a copy of Crown of Thorns today on iTunes and enjoy the track. Its 100% curse free, so parents don't worry....By the way, Rakaa has been a supporter of HHCF since day one. He loves chess and he loves jiu jitsu. Now turn your speakers up.
at August 04, 2010

Why train in the Way of the Sword if I haven't the courage to try?- Miyamoto Musashi


I love jiu jitsu. Last weekend I got the opportunity to compete in the Kugtar Challenge. It was a great tournament thrown by my good friend Vince Vanderlipe, in Salnias CA. I was in a purple belt match against Erick Fallon. It was a great match, I lost on points 3-0 (he passed my guard- which means he escaped my legs). But it was a great match and I look forward to more competitions in October when the US Open happens in beautiful Santa Cruz, CA!! Thanks to my man Nick for shooting it.

I posted this because I want people 14, or 40 (my age) to know that competition is a good thing. You will win some and you will surely lose some, but loving the game is what its about. Despite not winning, I was able to do a lot of things in this match I did not do well in prior macthes (control grips, escape side mount position, continuously attack with chokes).  There were other things I did not do so well (no sweep attempts, no throw/takedown attempts). But I took many steps forward mentally and strategically in this match. I know I'm growing in my art. I have to thank Erick Fallon for being such a good competitor and a good person. We had great conversation after the match.

I'm no Rickson Gracie, but I love the path of jiu jitsu. I used my Nintendo DS to help prepare myself mentally for my jiu jitsu match. It helped me have more confidence in the choices I made. Brazilian jiu jitsu has brought me much health, much fun and allowed me to meet some of my best friends of all races and cultures I've ever met in my life.


Much love to my team at www.heroesmartialarts.com, my instructors Gumby and Shozo Fukuda. I plan to get gold at US Open. I'm training for it already.