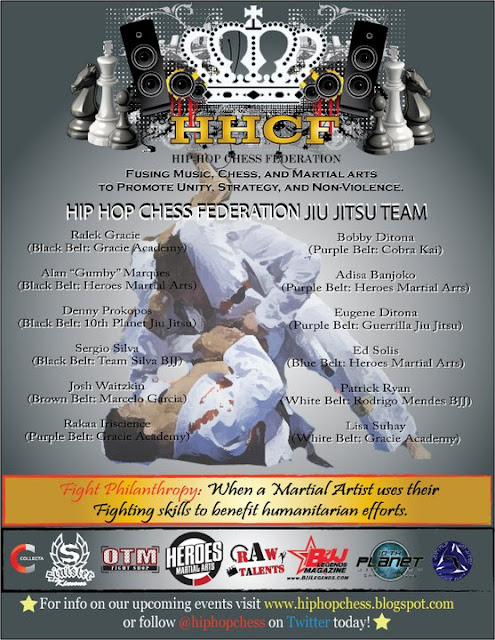 The Hip-Hop Chess Federation now has its official HHCF  Jiu Jitsu Team. We are a group of people involved in Brazilian Jiu Jitsu who dedicate their lives to helping people off the mat as well. Fight Philanthropy is what we do. Fight Philanthropy is how warriors give back. In a few months, you will see the members of this team doing some amazing things to serve the greater global community. I want to take a moment to thank all the people involved who chose to be a part of this team. Also note that every person on the team is not an expert at the art. You don't have to be a Black belt to give back. You will see some of these people at Boston University March 26th 2011 when RZA defends his HHCF Chess King title belt.... 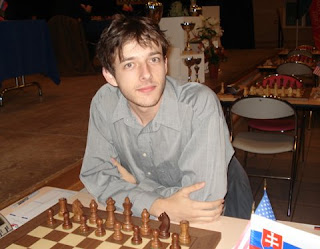 About a year ago, maybe less, I met IM David Pruess  from Chess.com at the Cal States Championship. He was a very laid back guy. We had some cool conversations about chess and life and competition. He did some great simuls and he guides kids into chess very well. Not long ago,  I caught up him on line the other month and I interviewed him via Google Chat. Check it out!!

Adisa Banjoko: At what age did you start playing chess and who taught you?
David: my dad
he also taught my little brother, and I mostly played with them until I went to a Berkeley Chess School chess program for kids at age 12. that's when I found out about tournaments, books, theory...
AB: When did you realize you were good?
David: Haha, I thought I was good like a lot of kids who don't know what's out there. I already thought I was good when I went to a summer camp and got scholar's mated 20 times in a row by some kid, until the time came to go home.
that's when i realized I was not good.
me: How did you face those losses? A lot of kids might have just quit. What made you keep going?
David: I was just dizzy, didn't know where the punch was coming from. It didn't affect whether or not I played though. I played cause I loved chess. I would have played all the time, but I did not know the opportunities that were out there to play (until 12).
AB: Now for those that don't know what it takes
What does it really take to be a Master? 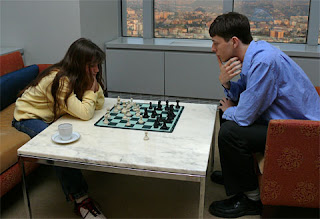 David: a lot of time, perseverance, losing hundreds of games and learning lessons from them, and pushing yourself to always be better than you were before... and a lot more, the list of qualities is extensive. those are some that seem most important to me.
AB: How did your parents prepare you for dealing with tournament pressure?
David: I'll say this, spending time does not necessarily equate to improvement. If you don't feel you are making an effort while you are practicing, playing, studying, the time probably doesn't count for much.
they didn't. They taught me great things like to love other people, but they didn't care about chess or competition. in fact, they taught me never to compare myself to other people, and for the most part, I never do.
AB: How did you find a balance between knowing not comparing yourself to other people but at the same time seeking this high level? It seems hard to do.
David: yeah i was lost for a while in my high school years, thinking it was important to be able to beat other people, get recognition in the chess community. then i got over it and returned to just playing for the love of the game, and to improve myself, without regard to how i matched up to others.
I think one reason i came back to balance was that playing for love of the game is fun, playing to prove you are better than someone else is not.
or I just slowly remembered that it's nasty to want to be better than others.
by the way, i was never competitive like that outside of chess, so it's definitely the competitiveness of chess that managed to bring that trait out in me. and i'm glad i got over it.
AB: Tell me about how you got hooked up with Chess.com
David : a lucky meeting for me with the two founders, lead to a dream job. I checked out their site, saw that they were great in their design. From a couple personal conversations, I decided they had the right ideas about how to treat everyone in the chess world with respect, and build for everyone at the same time. Then I was anxious to get to work with them.
(good stuff on your page by the way; just checked out recession-proof soul, and the american education is failingvideo)
AB: (thanks man!)
Any last words?
David: not any time soon!For more on IM David Pruess check out www.chess.com today!
at November 17, 2010