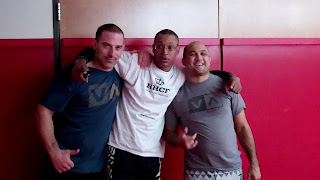 I met BJ Penn a long time ago. We were both new at Ralph Gracies. What I remember the most about him was his flexibility, his unmatched dedication to Jiu Jitsu and his courage. Deep courage. You all see it in the cage now, but, to see it then....Was almost even more amazing. He lived a few blocks away from me. After a while his older brother JD Penn would invite me to go to Alex Oxendines place....It was Alex's garage in San Jose...It was dubbed "Legends" and if you were in that garage you worked hard...Fast forward to 2011 and the world knows his name and he is an inspiration to people around the world. I saw BJ Penn for the first time in a long time....Thanks to Dr. Peter Goldman (he reconnected us). It was great to see him and Hoyt and Danny "Donothing" at Skyline College. The Head Coach of Skyline Wrestling team held a private grappling session. I got notice late and I walked in the cold on an empty stomach to roll. It was great. Nothing in the world like reconnecting with old friends. If you have never read his book Why I Fight, I suggest you get it for yourself, then give it to someone you love. -Adisa Banjoko
at December 11, 2011