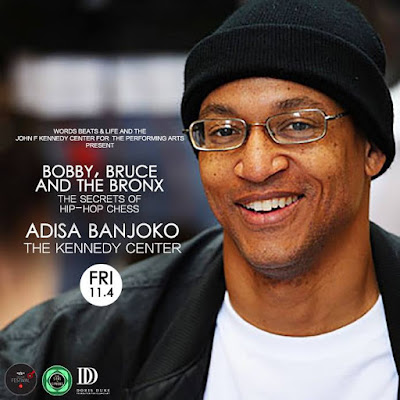 HHCF Founder Adisa Banjoko will be speaking at The Kennedy Center in Washinton DC Nov. 4th!!! He will be debuting new insights on connections between chess, martial arts, Hip-Hop and cognitive function. There will also be deep connections made between the rise of Bobby Fischer and Bruce Lee and the impact it had on Hip-Hop (seen through the lens of Luke Cage and The Get Down) !  If you are a fan of STEAM and STEM in education please make sure you are there. Get your tickets now https://www.kennedy-center.org/calendar/event/PRWBL

This event will be LIVE STREAMED on Periscope!!! To view the presentation follow @hiphopchess on Twitter & Persicope in your phone.

What a weekend. I don't even know where to start. I guess I will start by thanking all of the HHCF Jiu-jitsu team members and their families for supporting us at the US Open this weekend in Santa Cruz, CA. I also want to thank Alan "Gumby" Marques and all of the Heroes Martial Arts Family for all their brotherhood and sisterhood. I also have to thank the Deus Fight family for designing the only Official HHCF jiu-jitsu gi (The Oakland gi) and donating the uniforms to our team. Please buy one today.

I could give you all the back story but I won't. The thing I will say is that when I launched the HHCF Jiu-Jitsu and Chess program I did not expect this. I hoped for things like this, but really, it was beyond what I envisioned.

My first student Forrest AKA Batman walked onto the mats. He came to my school with encouragement from his father and his sister. He had previously been at HHCF Summer camps, but had never done anything like jiu-jitsu. Forrest is a super quiet kid. Till this day, I have never heard him yell. He always had high character and was always respectful. However he was also very mild. Some might say too might. He was never bullied, but, nobody wanted to see that happen.

What he lacked in vocal tone he made up for in focus and effort. In between time, I worked on his mind using books like Josh Waitzkin's The Art of Learning. I want to thank Josh personally and everyone at the JW Foundation for donating books to our class. With training from myself, HHCF's wrestling coach Andrew Swank and our other jiu-jitsu coach Sammy Teame Batman took home second place. I gave him the nickname Batman because Batman has no super powers. He works hard and he knows HE has enough inside of himself to win. Forrest is the same way.

He won his first in less than 2 min (virtual textbook win) and losing his second match just before the buzzer. The second match was dynamic from front to back, but I  don't have it on film. When I asked him what match he liked he smiled and said the second- because of the back and forth.

4 out of 5 of our athletes took home medals. 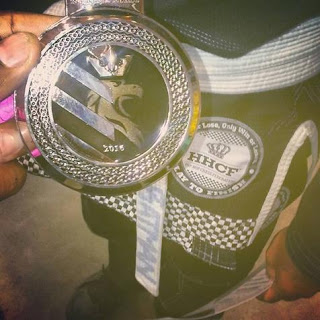 Batman WINS....This is not a movie. It is real. 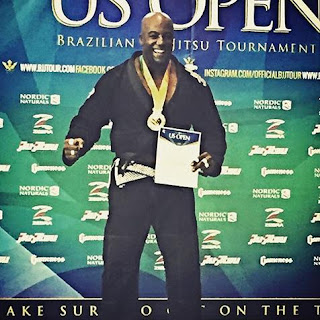 BillyRay aka Megatron took 2nd in his division and 1st in open weight div. 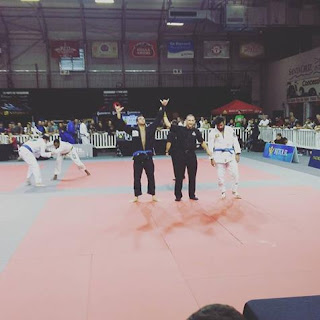 Bryan wins GOLD in his division. Fight with heart and technique. 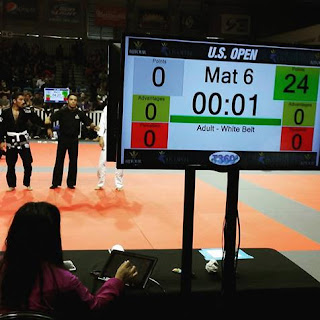 Pete was dominant in his first match. Most scores in jiu-jitsu are single digit, like a soccer game. This guy not only racked up 24 points but he secured an armlock with ONE SECOND on the clock. Electric. He went on to submit two more opponents after scoring big but lost in the semi finals. He walked away with a bronze. It was unreal.

One of our guys was DQ'ed for doing an illegal choke in his first match. I take responsibility for that. He thought the choke was legal. I assure you he will be crushing the competition in tournaments to come. I too will be back in the mats in the next month or so. I'm thankful to all our supporters. I also want to thank the coaches from all the teams that make up the HHCF Jiu-Jitsu team. Fighters from Heroes, Team Silva BJJ, Smash Gyms, Mauricio Alonso, KOA Martial Arts and others have united to support the cause of nonviolence and peace through martial arts, chess and Hip-Hop. There was a time in the bay when all of our schools would never support one another. Now through embracing the unity in our diversity, we stand as champions together.

If you would like for your son or daughter to be part of the HHCF Jiu-Jitsu team please sign them up today at www.hiphopchess.com

HHCF Jiu-jitsu Team Going to US Open This Weekend!!!

A quick shout out to our coaches and students competing in the US Open!!! The HHCF jiu-jitsu team is an affiliate of Heroes Martial Arts and we appreciate the guidance of Alan "Gumby" Marques, coach Sammy and our wrestling coach Andrew is developing our students.  Sign your kids up at www.hiphopchess.com . If you would like one of the HHCF jiu-jitsu gi's go to our sponsor Deus Fight for the "Oakland" gi www.deusfight.com !! 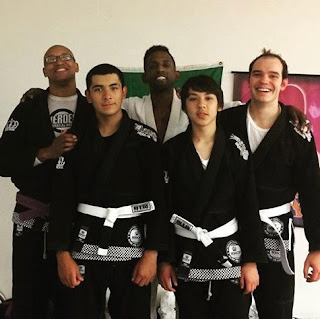 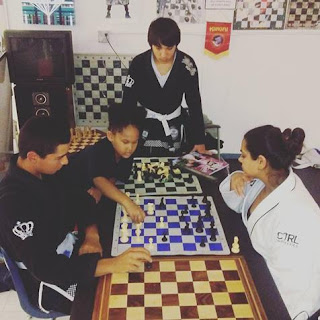 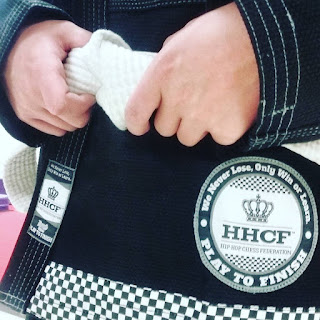 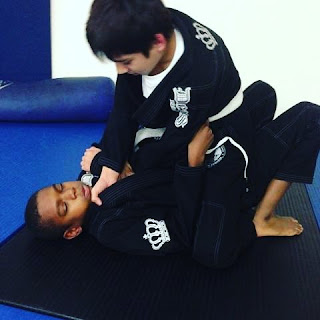 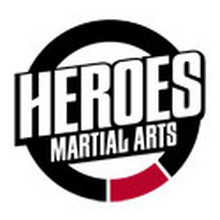 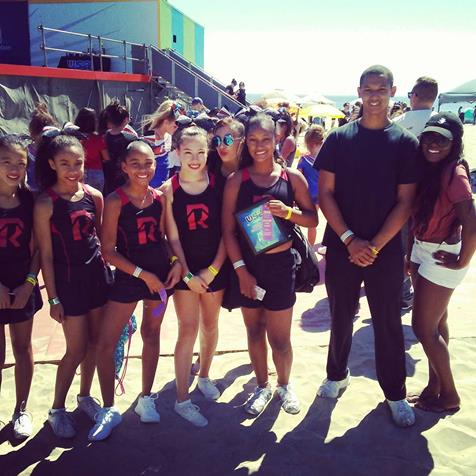 Big congratulations are in order for HHCF's Raw AllStars cheer and dance team. They took first place in their division at USA Regional Championships in Santa Cruz, CA a few weeks back. It was a totally stereotypical California beach boardwalk kinda day. Our kids worked super hard to get the win. Our coaches, parents, and choreographers all deserve a hand.

Another special shout has to go to our Lyrical dance team who competed the same day. They no only took first, but won a bid to compete in Las Vegas this May!!!! We are immensely proud of them. 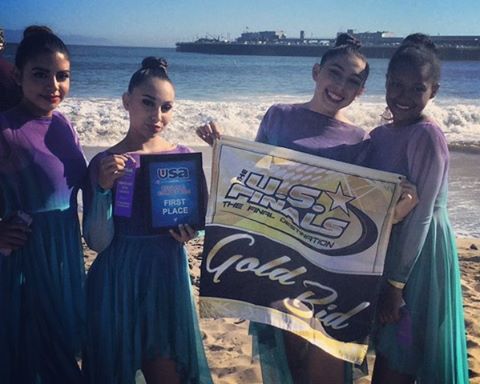 Sign our kids up today for award winning cheer and Hip-Hop dance at www.hiphopchess.com or www.rawtalents.org . All ages and skill sets welcome. No experience needed. See you on the floor!!!

HHCF is now enrolling kids in classes on chess, chess and life strategies and chess and jiu-jitsu and youth entrepreneurship . Our classes are fun, all ages and help kids of all backgrounds learn to value the power of their own mind and body.  We also offer amazing Hip-Hop dance classes taught by Grant Torino and Karate classes taught by Sensei Anthony Thomas! Visit www.hiphopchess.com to learn more. 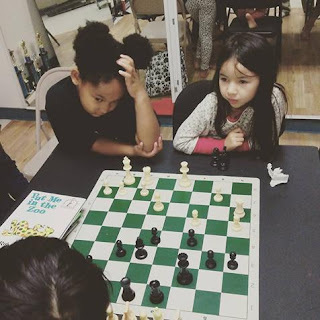 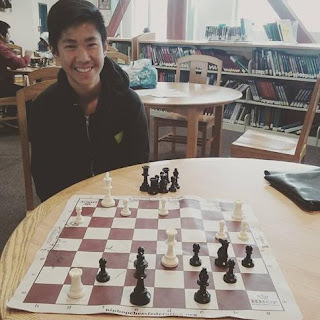 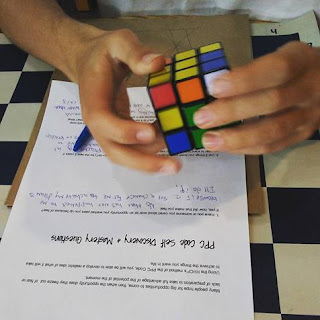 Over the trajectory of our existence, there have been many cool stories done our organization. We have had amazing features in Forbes, Good Morning America, Chess Life, Hard Knock Radio and others. This however, was very special. It was special because I don't think anyone has ever researched my life so intensely as Shawn Setaro when he decided to interview me for The Cipher Podcast. If you like Hip-Hop even a little bit, you must listen. He is my favorite Hip-Hop podcaster on the planet. Not because he did this story on me and the creation of HHCF. But, because he tirelessly tries to understand every person he interviews on a higher level. 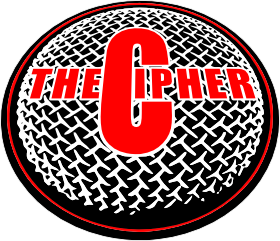 Please give this a listen and understand that a lot of what is on here deals with my life before HHCF. So there is gonna be some talk about cops, guns, memories of some of my folks like Eazy and Tupac and a lot of the pain I went through that brought me to creating the HHCF. 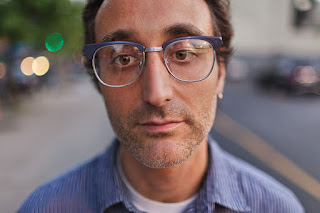 Shawn Setaro creator of The Cipher Podcast and Forbes writer.


I hope you like it. I'm sorry to Shawn for taking so long to formally post it.

HERE IT IS: The Cipher Podcast interview of Adisa Banjoko by Shawn Setaro