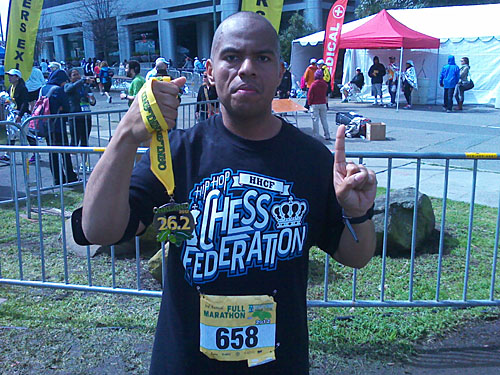 Bay Area rapper/endurance runner T-KASH has been active in the endurance running scene for several years now.
This year, he is once again using his star power to bring awareness to community issues. His next running event, the San Francisco Marathon this Sunday, will serve as a platform to bring awareness for the need of maintaining Title IX rights for students with dependents on college campuses and beyond.

"It's a dear issue to me, my mother went back to city college while I was in high school, and I obtained my college degrees while raising kids", he explained.

When asked why he waited until now to advocate for this specific time, he said, " The current socio-political climate could put the Department of Education and and Title IX rights for students at risk. I couldn't fathom doing nothing about that."

He is also acknowledging the ten year anniversary of the 2006 Guerrila Funk Recordings release "Turf War Syndrome", which has received countless accolades and solidified him as a globally recognized hip hop icon.

As with all of his previous running events, T-KASH will be sponsored by the Hip Hop Chess Federation, and wearing attire by fellow Oakland emcee Mistah Fab's "Dope Era" clothing line.

"Supreme Leader" by T-K.A.S.H. is now available online and can be found here.