By: Adisa the Bishop 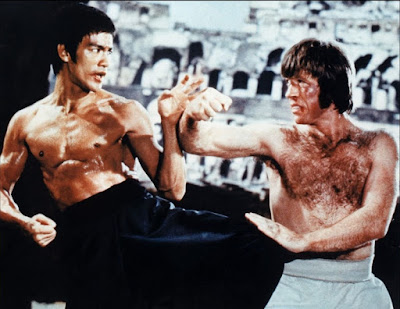 No one debates the cultural impact of Bruce Lee. This is especially real inside the Hip-Hop subculture. His roles as a martial artist and philosopher ensures  his status as possibly the most legendary martial artist ever. However, one of the most fascinating things about Bruce Lee is really not his fighting. It is his dancing. More than that though, it is valuable to look at how his dancing impacted his approach to fighting. Futhermore, it is powerful to study how this fusion of dancing, fighting and music seem to be eternally connected.


Bruce Lee was a champion Cha Cha dancer. In fact, his first job in America was as a dance teacher. This may appear boring on the surface to some people. However, for those who are authentic lovers of music (especially Hip-Hop) it makes the man even more fascinating. The first movie I saw that had Bruce Lee in it was Return of the Dragon. Even then, it showed  a glimpse of his love of shrouding devastating attacks hidden in rhythm. In the final fight scene, Lee fights Chuck Norris at the Coliseum in Rome. Chuck remains formidable as an opponent as long as Bruce stays within the traditional scope of kung fu and karate. However, once he starts hiding his attacks in a boxers rhythm (a la Muhammad Ali) Chuck cannot follow Bruce’s form and soon loses the battle. Few knew his ability to find and break rhythm was rooted in his Cha Cha background. But this connection goes much deeper than one film or one man.

Fast forward to the 2004 martial arts thriller, Hero. Jet Li plays a character called Nameless. In one scene Nameless has a powerful sword fight at an outdoor chess house in the middle of a rain storm. It is a soul stirring exchange of movement, music and strategy. As they unsheath their weapons an elderly blind man plays a sad but beautiful song. The old man plays in the rain slightly exposed to the elements of nature . Before he dives into battle, Nameless reflects on the idea that “Martial arts and music share the same principles. Both wrestle with complex chords and rare melodies.” 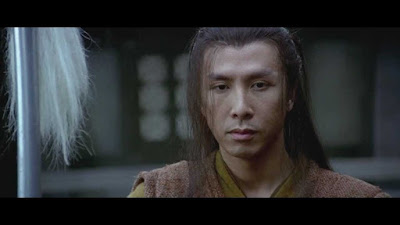 Nameless and Sky clash physically and mentally at  the outdoor chess house in 2004 classic Hero.

A few years ago I was given a book called The Straight Lead, by Teri Tom. The Straight Lead was Bruce Lee’s favorite and arguably his most powerful punch. In the book, Tom makes a compelling case for the connection between music and martial arts. “The way fighters play with time is very similar to the way musicians interpret time. You can play behind the beat, on the beat, or syncopate. Staccato or Legato. You can chose to play or let the rhythm section pass you by. The tempo may vary from adagio (slow) to allegro (quick). To the time, you can then add dynamic variations- pianissimo (soft), mezzo forte (moderately loud) or fortissimo (very loud). Fighting has analogous variables. “ The connections between music and martial arts is hard to see in today’s times. This is mainly because in the modern technology wave of mind numbing Worldstar and Instagram knockout clips, the art in “martial arts” has largely evaporated. Nevertheless, it is not gone altogether.

I cannot say for sure that Mayweather studies dance. But when I look at his footwork against McGregor’s mummy-like movements in the first round (although McGregor does appear to use the straight lead with some effectiveness in the first few rounds), Mayweather does move like a seasoned dancer. Not just that, the patterns with which Mayweather strikes his opponents have rhythmic patterns. This was something on my mind as I watched the flight. The more I watched, I saw how the flow of his footwork was levels above McGregor. They say Mayweather pulled McGregor into “deep water”. Water, like dancers and fighters, has to flow. McGregor was drowned in the flow.

Legendary undefeated self-taught swordsman Miyamoto Musashi is celebrated by martial artists and entrepreneurs the world over for his book The Book of 5 Rings. He killed his first opponent at the tender age of 13. In The Book of 5 Rings he talks about the importance of understanding the rhythm of battle when dueling with swords. It is broken down into several sections: the Earth Scroll, Water Scroll, Fire Scroll, Wind Scroll and the Void Scroll (also known as the scroll of emptiness). Each is admired for having its own sense of rhythm. But more than rhythm, like Teri Tom, he focuses on timing:

Timing is important in dancing and pipe or string music, for they are in rhythm only if timing is good. Timing and rhythm are also involved in the military arts, shooting bows and guns, and riding horses. In all skills and abilities there is timing.... There is timing in the whole life of the warrior, in his thriving and declining, in his harmony and discord. Similarly, there is timing in the Way of the merchant, in the rise and fall of capital. All things entail rising and falling timing. You must be able to discern this. In strategy there are various timing considerations. From the outset you must know the applicable timing and the inapplicable timing, and from among the large and small things and the fast and slow timings find the relevant timing, first seeing the distance timing and the background timing. This is the main thing in strategy. It is especially important to know the background timing, otherwise your strategy will become uncertain.

While it is simple to just passively look at that idea as just an odd relatable tidbit of information, it is not something easily done. While doing some research on his life, you can find an old scroll about his life called Busho Denraiki. Muashi did not write about himself much. He wrote about swordsmanship. But in the Busho Denraiki you learn that Musashi was not just a swordsman, he was an accomplished painter as well. Further, Musashi was also accomplished in the highly regarded Japanese tradition of Noh dancing. William De Lange’s Origins of a Legend: The Real Musashi notes that Musashi adopted a son named Iori. He notes that, “Irori was taught the Noh dance in plain clothes, it seems Musashi was a keen practitioner of the art.”

Nowhere in De Lange’s work does it attempt to explain how this unequalled swordsman found the time to learn let alone teach Noh dancing. However, the fact that he did know the art of Noh well enough to teach speaks volumes about how the role of rhythm in battle came so natural to him as a fighter.

Currently African American MMA fighter D’Juan Owens spends time in Kampala, Uganda and Dakar, Senegal teaching both b-boying and martial arts to kids. He teaches them the connectivity in both. RZA of Wu Tang Clan teaches a lot about these elements not only in his books, but the entire discography of the Wu Tang Clan is an embodiment of that concept.

Khnum Muata Ibomu aka stic.man of Dead Prez is a respected rapper, archer, vegan health advocate, activist and dedicated martial artist. Songs like Way of Life and Back on my Regimen are excellent examples of how music and martial arts connect in contemporary Hip-Hop. His knowledge of martial arts, music and strategy are so deep I had to ask him his thoughts.

“Practice is the way we get better in the application of rhythm” he told me. Stic said he feels that there is “Some science but it is also art. Self expression is required. My studio is a sacred space just like a dojo for experimentation and practice. Lyrics are precisely chosen and placed just like strikes and footwork.” Finally he notes that both music and martial arts are used “to serve a greater good.”

Jeet kune do, bboy/bgirl dancing, boxing, ballet, brazilian jiu-jitsu, capoeira, noh dancing, swordsmanship - all styles, all contain rhythms. Outside of the practicality of each art, each style speaks to us on an artistic and internal levels. Does every martial artist need to study dance in order to be a better practitioner? Maybe not. However, to totally ignore the importance of dance within the fighting arts is to cut oneself off from new insights and opportunities for victory.

LISTEN to this this episode of Bishop Chronicles Podcast on Bruce Lee and his love for dance and how it informed his fighting.

Adisa, The Bishop is the Founder of the Hip-Hop Chess Federation and host of Bishop Chronicles Podcast. He is a brown belt in Brazilian Jiu-Jitsu at Heroes Martial Arts and author of The Iron Hook Scroll and Bobby, Bruce & the Bronx: The Secrets of Hip-Hop Chess available on Amazon.