How Martial Arts Can Teach Nonviolence 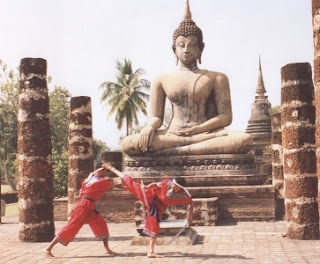 It is a story I told before, but I had not fully considered the implications of the moment I
learned about Bruce Lee. I was 9 years old when my dad brought home spanking
new technology. A VHS machine and tape deck. The first two movies he had were
Alien and an unknown film called Return of the Dragon. After watching the alien break out of a
guys stomach I was happily avoiding watching that film in its entirety. My 9 year old mind just
wanted to know “Who was this dragon?Where did he go? What is he returning to do?”
Boy were all my questions answered.

After finishing the film and making some nunchucks out of sawed off  yellow
broomsticks and some chains my older cousin Steve let me borrow (he went
onto become a karate master himself). I bonked myself on the head and hands
over and over until I had some half decent skill. I also went
crazy buying any magazines that were connected to martial arts of any kind.
I also took up Judo and, while not being very good at it, I did love it.

Being a natural born reader, the magazines helped me understand so much of
the mystery behind the men and the motives of their movements. One of the first
magazines I ever bought burned an image in my head possibly forever. The story
was about a Buddhist Monk in Thailand. The monk is in his robes, head shaven
and eyes gently closed in meditation. To his left as a young aspiring Thai
boxing champion cut deep into the heavy bag with his shin bone. The young
students lean cut body was dripping sweat in his display of full force and focused
on the heavy bag before him. The story went onto note that the Monk had created
a space for young poor kids to train and learn about
Buddhism in hope of them valuing peace.

It may appear hard to conceive, but people who train in martial arts are some of
the most peace loving people I have ever met. I think this is because most people
think they want to hurt someone. But people who really know how to harm someone
don't take pleasure in it. This is part of what keeps them calm when things get socially
tense. The truth is that knowing how to choke someone out almost demands that the
person with that skill understand the value of life.

That is how I always understood the picture in the old magazine. Even that that age, I got it,
but I could not have said it out loud. But I understood it. I saw Bruce always try to figure a way
to think things through and help solve problems. He never wanted to fight. I loved his family and his
Because of that unique entry into martial arts, I always had an understanding that the way of the
warrior and the pursuit of nonviolence were eternally connected. I consider these kinds of events
the some of the seeds of what became the
HHCF philosophy on nonviolence.

I recommend anyone trying to take their wisdom about inner peace and greater global
peace train in jiu-jitsu, judo, kung-fu, boxing, thai boxing- whatever. Read books like
The Art of Peace, The Art of War, The Prince, anything by Marcus Aurelius Clausewitz and others. Play chess casually to add to your understanding of the art of war. If you train and you do that, you will see things others cannot see socially
and do things other cannot do personally.

For more on Thailand and Thai Boxing catch Fightworld on Netflix.

Learn more about the connections between Hip-Hop, chess and nonviolence by subscribing to the Bishop Chronicles Podcast on Spotify, iTunes, Mixcloud or Libsyn. You can also buy the book  Bobby Bruce & the Bronx: The Secrets of Hip-Hop Chess by Adisa the Bishop on Amazon.