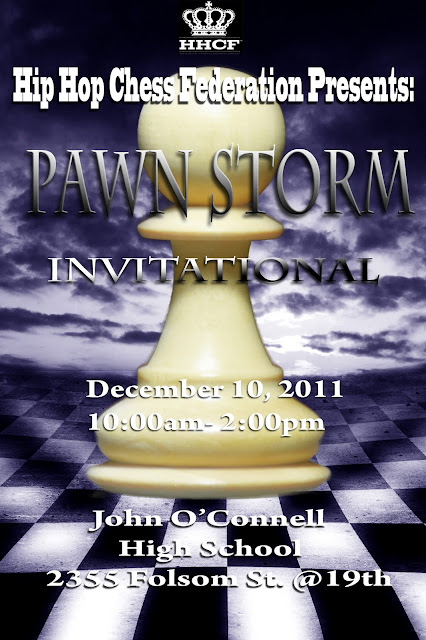 This is a tournament for kids inside the SF School District who register with us. The Pawn Storm Invitational is a team tournament for kids competing for the first time. Our goal is to promote unity in the SF community. If you have any questions email me directly at bishop@hiphopchessfederation.org for more details.
at November 28, 2011

You better get to know Weak Square!

Please be sure to check out www.weaksquare.blogspot.com !! Not only does he work with at-risk kids to learn chess, he's a truly gifted artist. Follow him on twitter to @weakSquare. He claims he is a novice but, based on the posts he puts up, dude, got a lotta knowledge!! Check him out though. He's a cool guy to know about in the chess world.
at November 27, 2011

My mom went to go see the play on Fela Kuti! Thought I'd share Stalemate...

I dedicate this song to my cousin Ben, may he rest in peace. He died at 19...so young. But before he died, while we sat in a car front of my home during the Holiday season we talked about Nigeria. He had just returned from Lagos. Him and his brother started talking about Fela Kuti. They both see I'm lost in the conversation. He asked me if I heard of Fela? I said I had not. He said, "If you like Bob Marley, you will LOVE Fela". Ben was right. He died four months later. I did not hear Fela until after he passed. I never hear a note from Fela and forget my cousin. That was ten years ago. I miss you Ben...I love you.
at November 27, 2011

The Iron Hook Scroll Vol. 1 is COMPLETE! (and its free!) 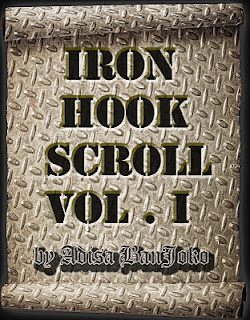 I'm happy to announce The Iron Hook Scroll Vol. 1 is out. Its done. Its FREE at www.ironhookEbook.blogspot.com. A few weeks after you get the scroll the Jiu Jitsu Innovations Newsletter will drop. I hope you enjoy it and I hope you stay safe and blessed out there. Much thanks to all who have supported me.
at November 27, 2011

This Story in the NY Times Really Warmed My Heart

Once again Dylan McClain is a great writer. He told their story well.As everybody knows, HHCF does not groom kids for competitive chess. But to see those that do rise, is lovely.

This article inspired some of the kids at my school today. A lot of teachers were talking about it to.
at November 14, 2011

For the last few weeks I've been haunted by a cloud (that I might have cancer). I had to get some tests over the last few days. Today I was informed that I am cancer FREE. But, I will need to get some other, very minor procedures done (compared to having cancer) in the near future. I just wanna say that I have gained some serious clarity on who I am, what I love and who I care about....Also, more importantly, what I have not done and need to accomplish. Much love to my real folks out there.