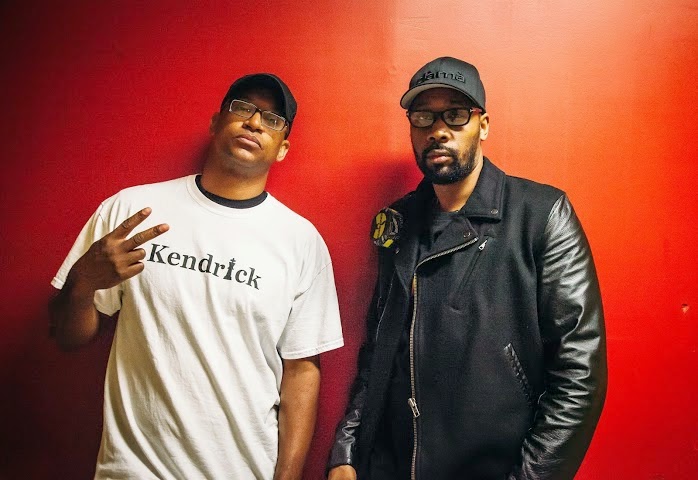 
San Jose, CA 10/14/2014- The Hip-Hop Chess Federation (HHCF) is proud to announce that actor and rapper RZA of Wu-Tang Clan and Adisa Banjoko visited the Demetrius Johnson Foundation and spoke to a crowd of about 400 mostly inner city teenagers from St, Louis on October 9th. 2014. The youth listened for an hour as Susan Barrett, of Barrett Barrera Art and Fashion led the discussion on how Hip-Hop, chess and martial arts can enlighten minds and promote nonviolence. St. Louis photojournalist Adrian O. Walker also spoke to the youth reminding them of their brilliance, potential and power.


Tension had been high across the city in the shadow of the recent police killing of Vonderrit D. Myers. The shooting death came as many citizens were still actively protesting the murder of  Mike Brown. RZA and Adisa Banjoko spoke about the value of all life, the power of peace and how chess can help you see options you might not have considered. The conclusion of the panel ended with a booming ovation from the crowd.


After youth discussion, RZA, Adisa and Susan visited the St. Louis County Family Courts Juvenile Hall to speak to co-ed incarcerated youth. It was a closed session and no media were allowed inside to protect the identity of the the youth. The panel was similar to the first, but it was filled with reminders that virtually all mistakes can be redeemed with consistent effort in seeking knowledge and wisdom. After their talk, RZA and Adisa played multiple games with the eager teens. Many of them were well schooled in the fundamentals of chess. A lot of fun was had by all participants.


From there RZA and Adisa went to the Living Like Kings VIP opening at the World Chess Hall of Fame. They were joined by St. Louis MC’s KyJuan from St. Lunatics as well and Tef Poe. DJ Needles rocked the turntables spun classic Hip-Hop and a b-boy cipher exploded on the floor.


Living Like Kings: The Unexpected Collision of Chess and Hip Hop Culture is an exhibition that explores the surprising ways in which the ancient game of chess intersects with the powerful, creative expression in hip hop culture, which includes music, fashion, art, dance, and spirituality. The centerpiece of the exhibit is a 27 minute film by Benjamin Kaplan shown on two screens simultaneously. It features RZA, Adisa Banjoko, Grandmaster Maurice Ashley, Rakaa Iriscience and Womens Grandmaster Jennifer Shahade among others. The opening of Living Like Kings broke all previous attendance records for an exhibition opening. People were lined up down the block to learn about Hip-Hop and chess.


Adisa Banjoko stated “It was an honor to serve as an Education Consultant to the WCHOF and teach their organization the history and art of how chess and Hip-Hop are connected. The Living Like Kings exhibition and film are very compelling and I believe this is just the beginning. For RZA and I, healing the impact of violence on St. Louis using music, chess and martial arts is key. Our organization focused on engaging at-risk and incarcerated youth of all backgrounds.


We cannot thank Demetrius Johnson, Rodney Hubbard and Susan Barrett enough for their trust in our intentions and abilities. HHCF will soon announce the schedule for our Life Strategies certification training for teachers, as well as kids introduction to chess and jiu-jitsu classes soon. A donation from RZA has made it all possible. We plan to announce the details of the program in a few weeks. The HHCF is grateful to RZA for donating his time, money, wisdom and compassion. “


RZA who serves as Director of Outreach for HHCF stated " It was a pleasure for me to join the HHCF The WCHOF and Demetrius Johnson in St. Louis to help spread the cultures of hip hop chess and martial arts.  The trip was enlightening, engaging and uplifting.


Enlightening in the sense I learned that St. Louis is a core city for the history of chess. Parts of the first world championship took place in the city. The World Chess Hall of Fame relocated from Miami to St. Louis.


The most engaging part of my trip was talking to the young people from different schools and the Juvenile hall. Hearing how they viewed the world and their city struck me. Hearing the young athletes ambitions and young talent,  seeking education and opportunity in order to better their lives and the lives of their family, community, etc., was a beam of hope.
Finally I was deeply moved seeing and knowing the frustration and disharmony the citizens are feeling due the past and recent brutality of law enforcement officers- it only threw gas on the fire of the city’s race relations. Then to see at the World chess hall of fame enjoy a full house of what Rev Jackson would have called a rainbow coalition of people, all under one roof with a common denominator.
“The Hip-Hop chess and art exhibition was the first of its kind in the midwestern city . The WCHOF experienced a record breaking attendance for a single opening night event. This is a testament to the fact that if we find what we have in common, we can overcome that which don't have in common. Thanks to Adisa Banjoko, Susan Barrett and the art contributors for the bravery and poise to show the city, there is a beam of light penetrating. Thanks for inviting me to be a part of it. "