Dang it feels good to see people up on it!

You can lie about history, but history NEVER LIES... 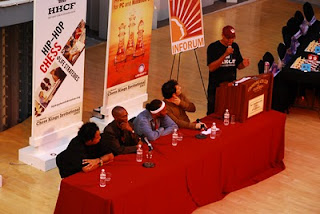 LINK: The results of the very first HHCF Event! DJ Qbert, Casual from Hiero and DJ Kevvy Kev in the Building!

LINK: When RZA came with Josh Waitzkin to kill the game

Listen to her spirit at the end of the clip and you will see what Adisa Banjoko saw in her then and now. Much love to 9 Queens Jean Hoffman  for her help at this one.
at July 29, 2011

This morning I got up to brush my teeth and my two year old daughter followed me into the bathroom. She really tries to do everything I do. I got my toothbrush and started brushing. Without even telling her a word she said “I wanna brush daddy”.
I smiled at her, put on her Dora toothpaste and she began to brush her teeth. She walked over to her mother and said “I’m brushing my teeth!” with a giant smile on her face.
It hit me as she returned to the bathroom that if I had not brushed my teeth- my daughter would have never been motivated to do it on her own. I lead by example, so she followed.
Its the same thing with friends or co-workers. If the President of the company stays late, even the janitor will be inspired to stay late. If the President cuts out early and is quick to leave random things to be done by others, so will the janitor.
My wife and I used to coach soccer. Every year we had a great team. But our first year, I made it a point to do the warm-ups with the kids. Every drill, every lap, every push-up, every crunch every shot- I did first. I never asked them to do something I myself could not do.
A lot of other coaches would sit on the sidelines with their fat belly hanging over their sweats demanding perfection they themselves could not deliver. It showed when game time arrived.
When I share a move in jiu-jitsu, I only show moves I know I can do. If I show a move that does not work for me, I tell the student “Some people do this move all the time, but it has never worked for me. It may work for you, so I want you to see it and try it.”
You can’t just talk about leading, BE in the front of the pack!
In chess its the same thing. I don’t tell people to do stuff from positions I’m not familiar with or simply not good at. Don’t be afraid to say what you don’t know. It’s actually a hallmark of leadership- not a weakness.
I tell people to live healthy, but man, I love sugar. I always try to eat good. But, sometimes I slip up and go heavy on the cookies. Slipping is human. But more than anything, work to be the most consistent person you can be when it comes to strengthening your mind, your body and your spirit. If you don’t lead from the front, nobody else will…
If the troops do not SEE the General brush his teeth, they may all end up with rotten mouths.
at July 29, 2011 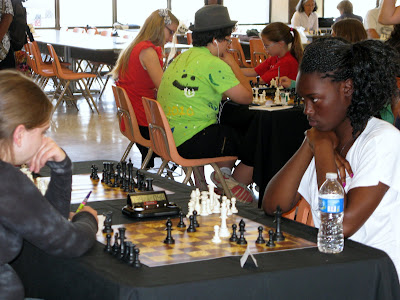 Thanks to the coaching of Abdul Shakoor, Dyhemia came back strong today and won her first match. This photos was snapped a moment before her opponent resigned. She was elated.
at July 28, 2011 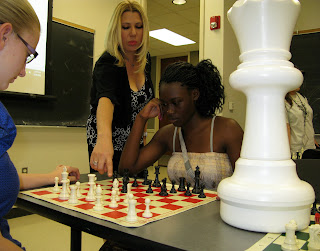 When I arrived at Texas Tech today I got to watch Dyhemia Young interacting with her host of new friends. While there are definitely more experienced players here, Dyhemia is lighting this place up with her personality and determination.

While some girls are taking the psych-out approach, posturing about winning Dyhemia looks at them and in a sharp tone answers back, well I know how I
'm gonna do!" A girl answers back expecting a fight and Dyhemia looks straight at her and said, "I'm gonna LOSE!"

A gasp went around the room as all the girls fell silent.

"That's right, L-O-S-E. Because I'd rather expect the worst and get the best and be surprised by what I can do."

The room held its breath waiting to see what would happen next, but the other girl smiled, shrugged and said, "Good point."

Mind game over and back to the 64.

FOX News will be here to cover the start of the tournament. Stay tuned for updates from this site.
at July 26, 2011

Hip-Hop Chess Federation Announces Live the Game
After School Mentoring and Anti-Bullying Classes
HHCF Teaches Anti-bullying Classes and Life Strategies with Chess and Hip-Hop
June 25th 2011, Fremont, CA- The Hip-Hop Chess Federation (HHCF) is proud to announce its Founder and Directors will be hosting Live the Game classes. The six week course will focus on teaching youth the connections between chess, life strategies and staying focused on their personal goals and dealing with various aspects of bullying. They will also be given an outline of self defense Bullyproof basics.
“The culture of bullying in America has spun out of control and Live the Game is our response” stated Adisa Banjoko, founder of the HHCF. “Kids from K-12 will first be given a foundation to believe in their ability to make sound decisions through chess. By fusing chess strategies with the best examples of positive rap lyrics in Slick Ricks “A Children’s Story” or Nas “I Know I Can” we will talk about the importance of self discipline, non-violence and a serious work ethic. Each class will conclude observing various verbal and physical cues that are associated with bullying and options on how to de-escalate the situation and stay safe.”

Live the Game classes will begin August 9th 2011 in conjunction with RAW Talents Group at 37428 Centralmont Place in Fremont, CA. The six week course will meet every Tuesday from 6:30 PM to 7:30 PM. Each enrolled kid will be given a copy of chess icon Josh Waitzkin’s The Art of Learning to study. The final class will have a graduation ceremony where each student will get a certificate of completion.

Fore more information on Live the Game Program follow HHCF on twitter @hiphopchess or register a kid you love today online at www.rawtalents.org 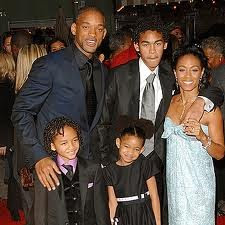 Written by: HHCF Volunteer
The agent for Jada Pinkett-Smith and Will Smith just emailed from Beverly Hills:
"I work for the Smith Family. Mrs. Jada Pinkett-Smith read yesterday’s story in the LA Times and was very moved. Can the organization accept credit cards? The earliest we can get a check to you would be by Tuesday morning.

Please let me know as soon as possible how we can best help this situation.

And that is How Cinderella got to the chess tournament and had a room and food and a happy ending.

God Bless Jada Pinkett Smith, Will Smith and FedEx!Special thanks to Rakaa, Jupiter JiuJitsu, DJ Lisa St. Regis, Zumbi, and Will Armaline and the Friedman Family for their additional support to deliver this dream!

Any additional funds raised will go to Dyhemia's college fund. We know this girl is going places!
at July 24, 2011