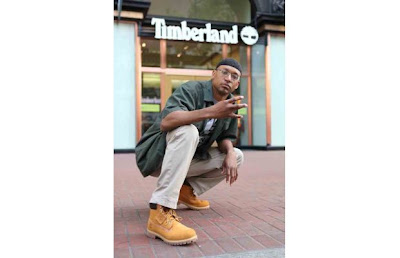 We still can't believe it either. Check out the rest of shots in the series on the Complex Magazine site: http://www.complex.com/sneakers/2011/08/gallery-the-25-best-images-from-timberlands-mos-campaign#21 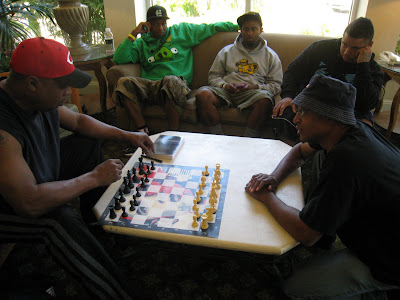 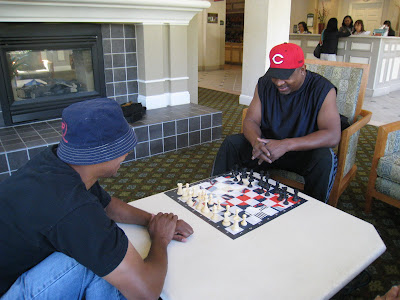 In the late 80's there was a huge African-American play called The Meeting. It was about a mythical secret meeting between Malcolm X and Dr. Martin Luther King Jr. At one point in the play, they play two games of chess. This sit down, was like that meeting. For the record, I met Chuck D the summer- 89 was the number. Sound of the funky drummer was all over the streets. The other night, I took my son to his first rap show. It had to be Public Enemy. My son met Chuck D after the show. Chuck shouted me out from the stage telling the crowd he knew when he came to The Bay Area, he was with family. It was touching. The day after, we talked business and sat at the boards for a bit before he was off to LA. Much respect to Chuck. I want to thank him for opening my eyes and my spirit to the positive impact Hip-Hop could have on the planet.
at August 21, 2011

If all you wanna do is keep the whole world back- YOU'RE the ones thats wack!

Jiu Jitsu is NOT the only fighting art that can be applied to chess. LISTEN to Bernard Hopkins

HHCF Working its Way to LA... 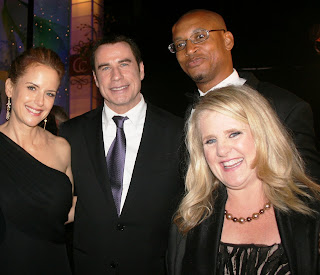 HHCF founder Adisa Banjoko, along with the HHCF Communications Director were recenlty in LA focused on west coast expansion. While down there, their friend Nancy Cartwright (the voice of Bart Simpson) invited them out for dinner. After dinner they bumped into none other than John Travolta and his lovely wife Kelley Preston. HHCF will be announcing the opening of its LA headquarters soon! For more info email bishop@hiphopchessfederation.org !! 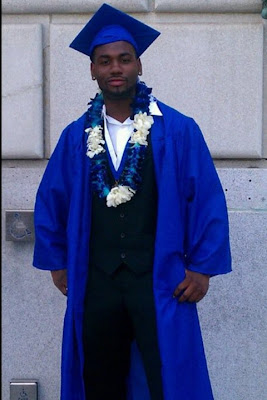 When Raheem Payton first met HHCF founder Adisa Banjoko, he weighed more than 265 lbs. After telling Adisa that he wanted to be in MMA and Jiu Jitsu, Adisa gave him a diet plan and a workout regimen. In less than a year Raheem returned to school at 190 lbs and Adisa became his jiu jitsu instructor on the condition that Raheem choose non-violence as a way of life. Raheem kept his word . Beyond that, Adisa made sure that Raheem kept school in focus above all else. Here is an interview on one of the HHCF ‘s shining stars.

HHCF: When did you first learn about Hip-Hop Chess Federation?

Raheem Payton : I first learned about HHCF in 2008 while attending John O’Connell H.S.

HHCF: What kind of things did Adisa Banjoko do to help you learn more about chess, martial arts, or life?

RP: Adisa has helped me with all three. The chess aspect, I was taught the basic movements and how to think before I act. With martial arts I gained a great deal of discipline and self-control along with physical health benefits. In life Adisa has been not just a great mentor but a great friend. He has helped me learn to take steps in life which is making me become a better person.

HHCF: Are there any particular stories you remember from your time working with him or watching him work with other students?

RP : There’s really too many to count. It seemed like every day I was coming to Adisa for advice on how to deal with my life issues. But one in particular I really remember was when I would be going through rough patches with my parents he would share his stories about how he dealt with similar situations and reassured me that everything would work itself out in time and to be completely honest it did.

HHCF: What do you think you will remember most about working with HHCF?

RP : What I really enjoy is the reality that comes with HHCF. Everything that people read about is real people and everyday struggles in life with positive ways to cope.

HHCF: How important was it to Adisa that you graduated?

RP: I can really answer that question with one word dedication. If I had to think of anyone who was going to get on me about graduation it would be Adisa. He was always the person who made sure I was going to be successful.

HHCF: If a kid asked you why they should word with Adisa Banjoko and the Hip-Hop Chess Federation what would you tell them?

RP: Adisa has so much knowledge to share and I believe not only children can learn from him I know many adults that need to be where he is as a leader. He doesn’t sugar coat anything, you can really hear the truth in his words.

RP: Adisa Banjoko is not only a close friend of mine he’s a father figure to me. I learn from him and I know a lot of people feel the same way. I was very lucky to come across someone that has pushed me time and time again to always push for my dreams.

If you would like the HHCF to mentor a young person you know email bishop@hiphopchessfederation.org
at August 09, 2011

Life Strategies Summer Series # 4: Find The Roots of Your Anger and Yank it Up

Of all the emotions on earth, the one most humans seem to most freely express is anger. This is a very dangerous emotion. Mostly, because it leads to the bulk of violence around the planet. When I say violence I don't mean just military conflicts. I mean brothers hitting sisters. I mean sisters hitting sisters (and bothers). I mean parents punching and slapping children. I mean kids pulling out guns on the playground. Its all a branch expression of anger. One second of unfocused anger has landed millions of people untold years in prison and even more in execution chambers. Don't let the next person you know be YOU!

But what are the root of anger?

For some, its fear. If people are bullied long enough, and endure in silence they can lash out violently with zero notice. Most people say that person went "over the edge". But the truth is, that long periods of humiliation almost always result in an angry outburst at some point. Some fear those of different racial, religious groups or genders. They attack those people falsely believing that they are really doing some good. Its never good.

Yet anger can be displayed with a level of dignity (meaning the person defends themselves from the bully by getting an adult or discovers their self worth and defends themselves). Or, it can become a twisted mass of pain an evolve into things like Columbine.

For most, anger is usually something thats wrong inside them. It comes some say, from a sense of entitlement. They believe that they have a "right" over this friendship, this boyfriend, girlfriend, husband, wife, child, etc. that justifies the reason they slap, choke, or slam someone.You never have that right. Unless you are truly defending yourself (or your family) and there is no other way out, there is pretty much no reason to be violent toward another human being. May times we try to play things up to make them seem more dangerous than they are so we can justify it. We put fake moral frames around it to make it seem like we are a hero. But we're not. Its just another cowardly act, clothed in another lie.

My son and I were talking about a book on leadership he's reading. He quoted a line from the book "They leave the root but try to set up the branches." If you try to set up hollow branches of fake smiles and laughs around an angry root, its bound to show up eventually.

Find the roots of your anger and face them down. If that means verbally confronting a bully- then do it. But don't allow yourself to become a bully in the process. If you find a bully staring you back in the mirror, take a moment to really think about why you do what you do. Find its root and yank it up.

The only good anger that I have found, is anger over things that affect common justice. If you see someone being bullied, it should anger you and you should do something to stop it. Tell an adult or tell the person doing the bullying that its wrong.

If you see an animal being abused, an elderly person being neglected it should make you mad. You should do something about it. Take action! But action does not have to mean being violent. Anger is normal. But how you express it, is totally up to you. Learn to uproot your anger so you can let it empower you, not destroy you.
at August 09, 2011

What was Adisa Banjoko doing before HHCF? He was working in prisons to free minds...What were YOU doing?

It's 10 a.m. on the last Saturday in February and local activist Adisa Banjoko is on one hell of a book tour. Inspired by renowned area rap vets hawking their albums out of car trunks, Banjoko sells his Lyrical Swords series — a collection of essays, interviews, and political ideas related to hip-hop, martial arts, and even chess — mostly hand-to-hand on the streets. For the release of his latest effort, Lyrical Swords Volume II: Westside Rebellion, though, he's forgoing the pavement to visit a place few big-name authors tend to tread — the California prison system. After speaking with Muslim inmates in Vacaville earlier in the month, today the San Jose resident is working the exercise yard at San Quentin. His goal: to educate the public about the importance of black and Latino unity, an issue especially important in light of tumultuous race tensions behind bars in this state.

Check out the Columbia Open!!

Much thanks to @weaksquare on Twitter for telling me about it!!

GM Ftacnik is playing in it. I wish I could be there.

HHCF Teamed with Ben & Jerry's Last Summer...Man that was fun!

Nobody keeps it REAL like the Hip-Hop Chess Federation


HHCF: Chess, Race, Class & the Urban Mind by lyricalswords
Thats why nobody has the impact we have on the minds of today's youth. Only the founder of the HHCF, Adisa Banjoko, has mastered the balance that connects music, chess and martial arts and illustrate how they correspond directly to unity, strategy and non-violence.
at August 02, 2011

The most touching quote from all the events on Dyhemia


As someone who volunteers for the Hip-Hop Chess Federation, I can say there are no words that can describe the sacrifices Adisa Banjoko has made to keep this organization running so that students like Dyhemia could realize their true potential.

I met Dyhemia here freshman year, I remember Adisa saying, this girl, I am getting this girl to college. I am in tears over Dyhemia's success, I am so proud to be a part of this organization. I am proud of Adisa for believing that every kid has the right to success and for Dyhemia in trusting Adisa and believe in the goal we all envisioned for her. -Chessqueen

****
Truth is, I said that so much, about so many girls at the school, I really don't know who posted it. But it means a lot. It means a lot...Thanks.