Hip-Hop, MMA and Chess Unite at Bobby, Bruce and Bambaataa Lecture
Gracie Jiu-Jitsu Master Ryron Gracie at HHCF HQ for Q&A on How Martial Arts Promote Peace in Our Community

San Jose, CA, 8/25/15-  The Hip-Hop Chess Federation (HHCF) is proud to announce that it will host a presentation by its Founder Adisa Banjoko aka The Bishop, called Bobby, Bruce and Bambaataa. This multimedia presentation illustrates the history of how the chess explosion of the 70’s and the Chinese kung-fu film craze impacted the growth of of Hip-Hop. The event will take place at the new HHCF Headquarters located at 42660 Christy St., Fremont, suite B in Fremont, CA September 5th at 3 PM. This is a free all ages event, but a $5.00 donation is suggested.

“No other form of music on the earth celebrates chess as much as rap music” stated Adisa Banjoko. “The work of Bobby Fischer, Bruce Lee and Afrika Bambaataa changed the way we look at the art. Much of how Hip-Hop artists approach perfecting their art, their mental approach to battle and even the vegan movement sparked from this fusion. Our conversation will be centered on how that happened and how we can use it to better educate our boys and girls better.” The lecture will highlight the impact of street chess and  kung-fu films on artists like Jay Z, Wu-Tang Clan, Will Smith, 50 Cent, Dilated Peoples, Mix Master Mike of the Beastie Boys and others.

The HHCF is the first 501c3 organization to fuse Hip-Hop, chess and martial arts to promote education innovation and nonviolence. The nonprofit has worked tirelessly for nonviolence since 2006. They recently were the foundation of a record breaking exhibit on Hip-Hop and Chess at the World Chess Hall of Fame in St. Louis. RZA of Wu-Tang Clan (the organization's Director of Outreach) and The Bishop were among the first from the Hip-Hop community on the ground in Saint Louis to work for mutual understanding and peace.

Ryron Gracie, Head Instructor at Gracie Jiu-Jitsu Academy will join in a Q&A following the conversation about how martial arts can promote fitness, wellness and make our communities more peaceful. Gracie is a thought leader of the sport of jiu-jitsu and MMA and a UFC coach to fighters like Brian Ortega and Ronda Rousey among others.

The entire talk can be watched in a live stream on Periscope through the HHCF Twitter account @hiphopchess and later heard at www.bishopchronicles.com podcast.

San Jose, CA, 8/12/15-  The Hip-Hop Chess Federation (HHCF) is proud to announce that it will host a Grand Opening of its new facility located at 42660 Christy St., Fremont, CA August 15th at 5 PM. The HHCF is the first organization to fuse Hip-Hop, chess and martial arts to promote education and nonviolence. The SF Bay Area based 501c3 has worked tirelessly for nonviolence since 2006. They recently were the foundation of a record breaking exhibit on Hip-Hop and Chess at the World Chess Hall of Fame in St. Louis. RZA of Wu-Tang Clan (the organization's Director of Outreach) and Adisa The Bishop were among the first from the Hip-Hop community on the ground in that city to work for mutual understanding and peace. Their work can be furthered now in their new facility in the SF Bay Area.

Dr. Bettina L. Love currently serves as an Associate Professor at the University of Georgia and was named the 2016 Nasir Jones Fellow at the W. E. B. Du Bois Research Institute at Harvard University. The title of her talk at the HHCF Grand Opening is: We Are The Ones We've Been Waiting For: The Possibilities, Challenges & Limitations of Hip Hop Ed. The entire talk will be live streamed on Periscope through the HHCF Twitter account @hiphopchess.

Dr. Love's talk will explore the possibilities, challenges, and limitations of Hip Hop Ed and its entanglement with the contested space of Black popular culture, while still functioning as a humanizing, critical, creative pedagogical intervention that fosters self-determination, self-knowledge, and acts of resistance with young people concerned about and fighting for justice. 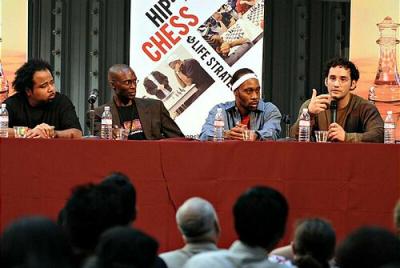 8/3/15 San Jose, CA- The Hip-Hop Chess Federation (HHCF) has just announced that it is auctioning three autographed chessboards signed by Rza and Gza of the Wu-Tang Clan, International Chessmaster Josh Waitzkin and Rakaa Iriscience from Dilated Peoples. The initial auction price of the boards is $150.00. The boards had been lost after they were signed in October of 2007 at the Chess Kings Invitational in San Francisco. They recently were found as the organization was moving items to take to the new facility. The auction is happening to raise funds for the new HHCF Community Center. The new community center will host various classes on Hip-Hop dance, chess, Brazilian jiu-jitsu and after school tutoring and mentoring programs.

HHCF Founder Adisa The Bishop recently finished serving as an Education and History Consultant on Hip-Hop and chess for the record breaking exhibit at the World Chess Hall of Fame in St. Louis, Missouri. The discussion on chess, martial arts and Hip-Hop as tools for non-violence has swept across universities like University of Connecticut, University Wisconsin Whitewater and Oberlin College among others. HHCF Summer Camps were hosted in San Jose and in East Palo Alto to help keep at-risk kids off the street and planning their future.

RZA serves as the Director of Outreach for the HHCF. In the wake of the police shootings of  Michael Brown and Vonderitt Myers RZA and Adisa spoke to St. Louis youth and visited incarcerated youth.  RZA shared his in depth wisdom about race in America, Ferguson, and the importance of chess as a tool for life strategies and  non-violence.

“These chessboards represent a unique era in the fusion between chess and Hip-Hop” stated Adisa The Bishop “These boards are not going to be reproduced. Whether you are a Hip-Hop or chess history buff, this is a truly one of a kind thing to have for any collector to own.”