Author Removes Hip-Hop Pioneer Afrika Bambaataa from Book Cover and Changes Book Title Amid Abuse Allegations
Controversial Rap Author Stands with Accusers
Oakland, CA 6/09/16-  Three Lions Press is proud to announce that the author has chosen to take Afrika Bamabaataa’s name and image off the cover of the book originally called  Bobby, Bruce & Bam: The Secrets of Hip-Hop Chess. The new title is  Bobby Bruce & The Bronx: The Secrets of Hip-Hop Chess written by Adisa Banjoko, aka The Bishop. It is for sale  on www.amazon.com right now.

“While not being charged formerly by the police, the avalanche sexual abuse allegations against Afrika Bambaataa and the poor leadership of the inner circle inside his organization, Universal Zulu Nation (UZN)  made my decision easy” stated Adisa Banjoko. “Hip-Hop is an art  for the youth, by the youth. If they are not safe, then Hip-Hop itself has been threatened. I will defend the youth above any alliances with any adults who might act to the contrary. My new title is meant to celebrate the power of the youth  in The Bronx. It was a nightmare for me as an independent author and fan of his previous work to change everything. Nevertheless, it could never compare to the pain of his accusers. ”

Adisa Banjoko was one of the first members of the Universal Zulu Nation in San Francisco back in the early 1990’s. After assessing the allegations against Afrika Bambaataa he wrote the first public UZN resignation letter. It outlined why he was  leaving the organization and his thoughts on  its many organizational and moral  failures.

Adisa’s first public discussion of the book cover change happened at Google Headquarters during a  Google Author’s Talk. Over the years the author has campaigned on the impact of this blending of art and logic at Harvard, Stanford, U Conn, Oberlin and many other universities.

Bobby, Bruce & the Bronx: The Secrets of Hip-Hop Chess is  extraordinary book that outlines how the  of rise of Bobby Fischer, Bruce Lee and the emergence of Hip-Hop unintentionally converged and influences Hip-Hop, chess and martial arts in America and the world in unexpected ways. It includes a workbook teaching the first 12 lessons teens and young adults can use to embrace chess as a life strategy tool. These lessons can be applied in your personal life, or business ventures. Get the book now at www.amazon.com The book serves as a disruptive blueprint that helps urban kids shift their approach to education, entrepreneurship, and life’s possibilities.

“The  book is a celebration of the cognitive, physical and creative attributes of Hip-Hop. We also address the impact of violence on young learning minds. Many American children have PTSD and remain undiagnosed and untreated vets of urban war zones.  I saw this on the frontlines and my book is meant to be one of many solutions we can use to help American youth.”

Adisa Banjoko, aka The Bishop is a respected disruptor in the space of education innovation. Adisa began his journalism career while still a high school student interviewing Eazy E shortly before the formation of NWA. Adisa  went on to become one of the first west coast writers for The Source, RapPages and VIBE among others. He broke some of the first profiles on artists like Tupac Shakur, Del, Mixmaster Mike, DJ Qbert, Hieroglyphics, Master P and many others in the rise of west coast rap in the early 1990s’. Adisa Banjoko is a powerful speaker who has lectured at many universities across the country including Harvard, Lehigh, Oberlin College, UC Berkeley and others. His ideas on chess, rap and martial arts have been seen in Forbes, Good Morning America, Black Enterprise, Ebony and the cover of Chess Life Magazine.

In 2006 after visiting incarcerated youth in San Francisco he created the Hip-Hop Chess Federation (HHCF). The HHCF is a 501c3 non-profit that fuses music, chess and martial arts, to promote unity, strategy and nonviolence. in 2015, the HHCF was invited to teach the staff at the World Chess Hall of Fame in St. Louis on the connections between Hip-Hop and chess. The result was the Living Like Kings exhibit (which broke attendance records surpassing Bobby Fischer's). He and RZA of Wu-Tang Clan (who now serves on HHCF’s Board) spoke to high school youth and incarcerated youth in St. Louis during all off the rage and chaos after the death  of Mike Brown. Their efforts illustrated a nonviolent narrative largely overlooked by both mainstream media.

Bobby Bruce & The Bronx: The Secrets of Hip-Hop Chess outline how this unique fusion came to pass and the lives Adisa Banjoko has been able to change through it. The book highlights his his experiences while  in teaching kids in St. Louis  with Wu-Tang Clan’s RZA, his experiences fighting inner city school violence in The Bay Area and how rap music celebrate chess more than any other form of music on the planet. For more information on Adisa Banjoko and the Hip-Hop Chess Federation summer camps, events and activities visit www.hiphopchess.com ! 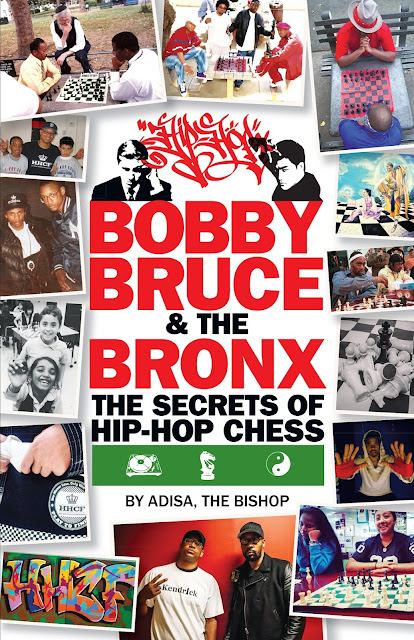 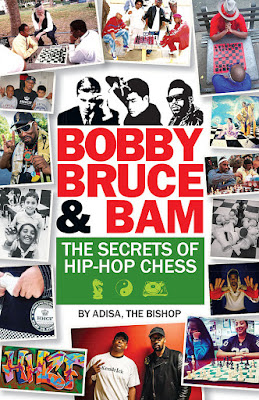 The old cover with Afrika Bambaataa on it. The allegations of child abuse by Bambaataa made headlines around April 8th 2016. The book dropped on April 10th 2016.