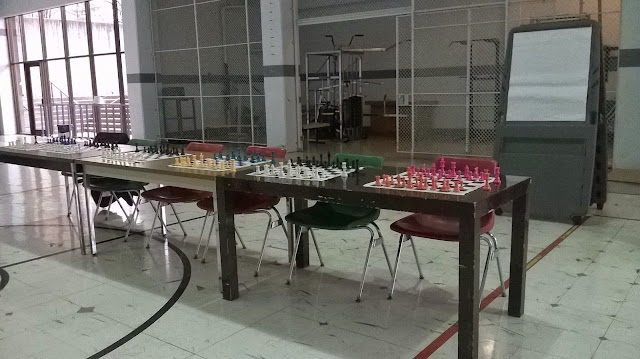 This past weekend I was in St. Louis talking to kids about the value of Hip-Hop and chess. As many of you know, this has been my lifes obsession that went from a small organization to a rapidly growing 501(c)3 nonprofit.

The long version of what we do, is that we fuse music, chess and martial arts to promote unity, strategy and nonviolence. We have been doing this since 2006 and the impact is expanding and  as our research and knowledge is refined and revealed through innovative outreach strategies.

Rapidly these strategies gave us new insight and naturally changes our form of approach. So today we simply say, “The Hip-Hop Chess Federation fuses logic and the arts, to unite minds and hearts.” It may be done through chess, Hip-Hop, performing arts, cheerleading, theater- it goes on. We are not committed to anything beyond helping American children improve their sense of purpose and academic function. How it happens, is less important. We all learn differently.

Our organization was born from a visit I made to a juvenile hall detention center in San Francisco. Since then I have always had a special place in my heart for incarcerated youth and at-risk youth of all racial, cultural, and religious backgrounds. We believe that American children are some of the planets most valuable resources. Many of these intellectual diamonds, rubies, and emeralds are largely undiscovered in our juvenile halls and dysfunctional high schools. So this is where we like to spend our time. We excavate the minds of the youth in search of a better tomorrow.

RZA from the Wu-Tang Clan has faithfully served as our Director of Outreach. since early in our infancy. After doing a mountain of research for the Living Like  Kings exhibition at the World Chess Hall of Fame (because of the kindness and wisdom of Jennifer Shahade and Susan Barrett) RZA and I spoke at the Demetrious Johnson Charitable Foundation to about 400 kids from across St. Louis (where the WCHOF is located).

I fell in love with the city a year or so before when I came out there with my man Mike Relm. He and did some work at a co-ed juvenile hall and it changed me. It refined my sense of purpose. RZA and I spoke there again the day of the Living Like Kings opening. They invited us back and the demand was heavy. Before the closing of the opening, I returned for a weekend to meet with some hitters in education, innovation and art between new visits to both the city and county juvenile hall facilities.

I went with the HHCF’s Director of Chess Education, Kevin Hwa. He’s a great teacher of chess as well as a super avid Hip-Hop head. He understands chess on a much deeper level than I do and can integrate my philosophies into positional realities on the board that I cannot see (due to my very average playing ability).

When I invited him out, Kevin was immediately on deck. He is a true student of the black and white jungle. A chance to go see the World Chess Hall of Fame, visit the St. Louis Chess Club (the Mecca and Medina of the chess world) and help kids in the same weekend? He was not going to miss that.

Our hostess was Susan Barrett of Barrett Barrera. She is to HHCF what Obi Wan Kenobi was to Luke  and Han Solo. That was unnecessarily nerdy, but it is a fact. She took us around and is always framing and reframing the history and culture of St. Louis for us so we don’t miss a beat.

When we landed it was super late. The city was chilly, but not freezing as it usually is this time of year. After checking into the hotel we went straight to my favorite sushi spot, Drunken Fish we tore down some White Tiger rolls and Spider rolls as we talked about everything under the sun. It was almost 1 AM and we were lucky they let us in. We went back to the hotel and got ready for the morning grind.

At 8:45 Susan pulled up and we went to the juvenile hall. Kaelan Mayfield greeted us (he’s a real good dude) and took us to the lunch room. It has mustard colored walls and fluorescent lighting. The overcast light from outside gives the room and odd balance of light and darkness. Juve is gloomy homey. This was the first place Mike and I went to when we first came here. This was a bigger group of kids. The audience was 100% Black, as it was last time. A small contingent of girls with faces harder than the hardest hard rock could get entered the room.

Kevin setup a board and played with kids who knew the basics while I evangelized on the power of chess for young minds. I was not met with much immediate buy in. But I kept on. I broke down the 3PA > 1NT methodology. Told them how I knew Pac in my youth and the importance of reading. I broke down how if Pac does not read The Prince by Niccolo Machiavelli we lose how military science and Hip-Hop meet. I talked about Michael Jordan and the important duty of diligent practice. I talked about how the Moors brought chess to Europe and if those African Muslims don’t do that then we never get chess in America. At that point in the conversation I might as well have been telling them about Martians.

Susan shared some ideas on art the work ethic it takes to be truly great. Kevin was showing the kids how to improve how they see what is happening on the board and why. I cannot lie, it was a lukewarm start. Nevertheless, by the time the session was done, they were feeling us. . I even shared a 16 bar rhyme cipher with one of the youngsters. He was really good. A reminder of the untapped artistic and intellectual goldmine in juvenile halls of America. 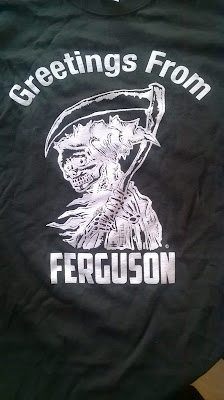 From there we went on several meeting with artists and educators across the city. One of the most memorable was Daniel Jefferson. He is one of the realest dudes out there right now. His approach and sincerity struck me. I wanna bring him out here. He reminds me of my man Keba Konte...They look related. I also made a stop by the Philip Slein Gallery where they have an amazing exhibit on African American artists. Such a healing and beautiful space given the nature of the tensions in the city out in Ferguson. Needless to say, HHCF has a new crew of allies and we are honored to be in tune with so many wise and beautiful spirits. 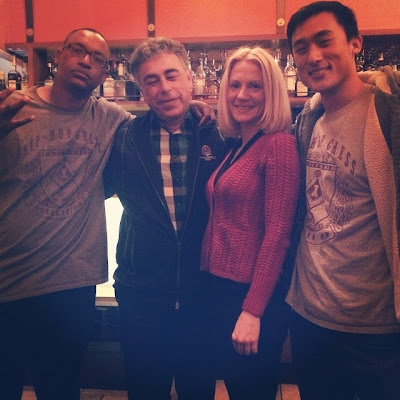 
Next we had dinner with some amazing friends at Bar Italia in the Central West End (soooo good). As luck would have it Grandmaster Yasser Seirawan and Ana Sharevich were there. Yasser is a wise and fun man who always has been supportive of HHCF. It is always enriching even to spend a few moments with him. 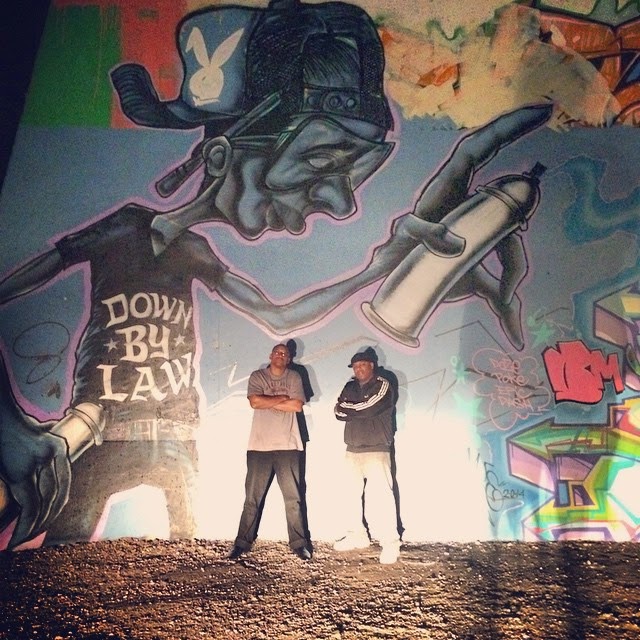 After dinner rapper So’nSo from Midwest Avengers took us around St. Louis. It was almost midnight. Me and Kevin wanted to go to Ferguson, but we all agreed it was pretty tense and we did not wanna get hemmed up. All day rumors of the city announcing on if Darren Wilson would be charged by the DA would happen. Riot vibes were in the air. Instead he took us to Paint Louis. It is a mile and half long wall of bombing (graffiti pieces). It was so amazing. I was mad it was so late. I plan to go next time first thing after hitting Sweetie Pies!!! Damn that food is the best soul food on Earth. 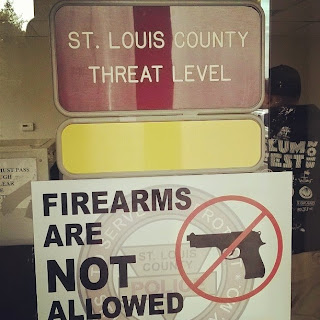 The next day we went to the other juvenile hall center. This was the one where RZA and I had spoken together at in October. TJ and the rest of the staff there are always very awesome. One of the other guys there, Mike, is a serious Brazilian Jiu Jitsu student. He and I spoke at great length about how cool the connections between chess and BJJ are. Not long after that the kids came out.

Most of the kids from my initial visit with RZA were gone. None of the girls from our previous visit was there. About ¼  of the kids from in October were on hand. They were excited to see us there. Kevin and my man James had the boards set up.

They have a serious passion and knowledge of chess fundamentals. Some of them are giving me pounds on sight. The ones who were not here when RZA and I last spoke are just supportive off top because they see the love we get from their peers. When I jumped into the philosophy of it, they were locked in from word one.

I went over 3PZ > 1NT again and went into the Poisoned Pawn. They got it. They loved it. Then we had Kevin host the simul. They had never seen one. Essentially, we line up all the boards. The kids are on one side. Kevin is on the other. He walks to the first board, moves, then the other guy moves. Goes to the next board, moves, then the other guy moves etc. He rotates to each board move by move until no one is left. It was great. The winner got to keep one of the boards. Then Susan suggested we give a few boards to the hall. TJ and Mike were happy about that. 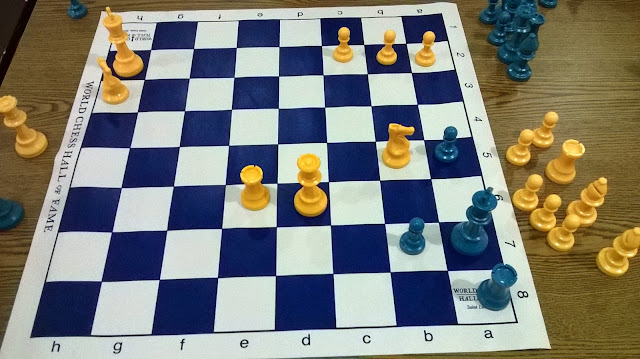 Adisa Banjoko gets faded by one of the kids in St. Louis.

I played a few games. Lost one to a kid I crushed a few weeks back. He was looking for me. I had a few big blunders. First, I did not castle early as I had planned. Second, I slipped and lost my queen early. Third, I thought a knight fork check was real when it was not real. I lost.

The kid was so juiced. I told him I looked forward to playing him again in a few weeks. He smiled big and said “I get out tomorrow.” To not be able to play him next time I come out, made my happier than plotting my revenge on the 64. 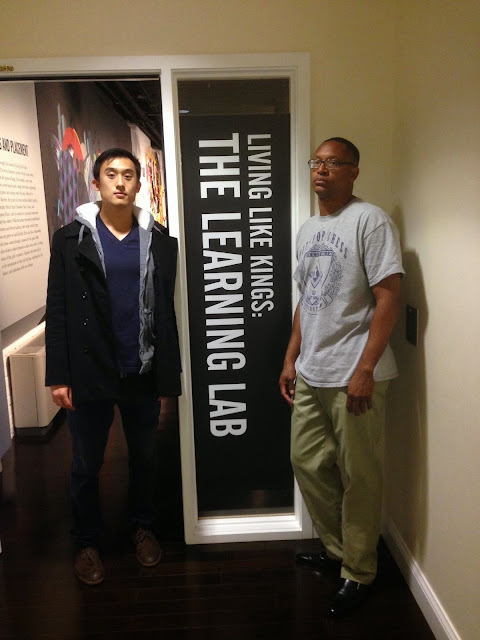 Super long story short. We ran by the World Chess Hall of Fame and the St. Louis Chess Club to take some photos and chill. Took some photos of my research on display. Then James took us to the airport. It was an amazing trip. So’nSo Midwest Avengers, KyJuan from St. Lunatics and Jason Wilson get an extra shout out. Looking forward to building more bridges between St. Louis and The SF Bay Area. If you or anyone you know might be interested in helping us connect on a deeper level, or help is find funding for education, arts and peacemaking events visit www.hiphopchessfederation.org .

PS. I know we are late dropping the HHCF Street Games Vol. 2. It is in the mix. I gotta send the last tracks to DJ Rob Flow. I think it will drop in late Nov., or early Dec. Grandmaster Maurice Ashley and Eugene Brown (the real dude from Life of A King) are the hosts for the mixtape.