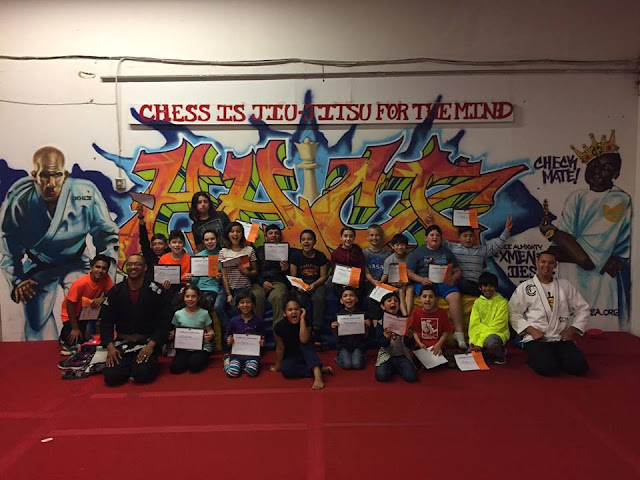 Many people often get confused about what we do. At the end of the day, we teach non violence through the fusion of art and logic. We pull wisdom from wherever we find it. But we mostly find it from blending concepts from Hip-Hop, chess and martial arts.  It takes a lot more to explain how we do what we do and why it works. At the end of the day however, we teach peace. That is what HHCF does. The good grades, the scholarships, the trophies are just things some of the kids get on the way to a fruitful life.

The creation of our org, the lectures across the country, our exhibit at the World Chess Hall of Fame in 2014, our championship dance teams, the book Bobby, Bruce & the Bronx: The Secrets of Hip-Hop Chess are all tied to that endgame- nonviolence.

We recently announced our Chess and Jiu-Jitsu classes and I am happy to say it is growing. Each class is a fusion of chess instruction and gaming and jiu-jitsu or wrestling positions. Assistant jiu-jitsu instructor Sammy Teame and wrestling coach Andrew Swank ensure each class is technically on point and physically demanding. In every class we always return to the importance of emotional mastery, kindness and mercy. You always hope these things reach our students, but you are never sure.

The other day one of my students told me had gotten into a physical altercation. He is 14 and while off campus a bully (who was acting very immature) and hit my student in the face with leaves on the branch of a tree branch. My student told him to not do it again in a respectful, but firm way. The bully took it as a challenge and did it again and ran off.

He said to me “I chased him, and then as I got close to him he threw a fist full of acorns at me as he turned to face me.”  From his repetition in training, after being approached he was quickly able to get to the bullies back and begin applying a choke hold. He said he felt the bully tense up  from not being able to escape the hold. The bully could feel the dominance of the position as my student got ready to squeeze. Then my student remembered the talks on nonviolence I gave in class. Released the choke put one hand and put the bully's arm behind his back and pushed him away. He again told the bully to stop being childish and leave him alone. When I asked him specifically HOW he got to the kids back, he replied “I don’t know how. I just got there.” This impressed me.

After being pushed away, the bully got enraged and charged him. Again my student got to his back, and reset the choke. He was angry he said at this point. He let go of the choke again, and bear hugged the bully to prepare to suplex him. Then he said he thought about how dangerous it would be to slam him on cement. He also thought about how mad I’d be at him for seriously hurting a kid he did not have to hurt.

My student let him go. The bully, realizing the level of mercy being given him stopped harassing my student.

I was happy to hear a few things:

His father took me outside and thanked me for teaching his son. I was thankful to him, for trusting me with his son and joining our chess and jiu-jitsu program. I feel good. This is not a scientific study. But it is real. A new student starts tonight. I look forward to helping this youngster grow on the chessboards, on the mats and in life in a similar way. I hope in the future, all of our children can learn how to return injury with kindness through the fusion of chess and jiu-jitsu.