Nonviolent Rap Song of the Week #3 Self Destruction 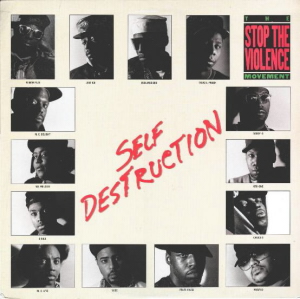 Top rappers came together to try and stop the violence on the streets.

Self Destruction was a record dropped in 1987 meant to help curb Black violence across the country. It was spearheaded by KRS ONE and included some of the biggest names in Hip-Hop at the time. Public Enemy, Heavy D, MC Lyte and many others were also on the song.

At the time they launched the Stop the Violence Movement. It was a valiant effort. But between the lack of big financial support and Hip-Hop being in its infancy not much came from it in terms of concrete impact. It did, however, serve as a blueprint that rappers use to this day to share their thoughts on violence. No other form of music in the history of the earth has as many songs about violence as rap.

It also showed that Hip-Hop artists were dedicated to more than partying. Inside Hip-Hop we knew that, but from the outside looking in, I understand how it may have been hard to see. Hip-Hop was one of the first victims of "fake news".

I think when people look at Hip-Hop we might look at LIVE AID or We Are The World as one off songs.

Self Destruction was not a one off. It was the epicenter for a wave of songs on peace, nonviolence, and records looking at the trauma of violence in the hood. I have to admit though that I never liked this beat. At all....Sometimes I think when people get ready to do songs for the community, they make half baked beats. I found it hard to believe that all these dope people could come together and have such a yawn worthy beat. But the spirit of the track was more important.

Read the annotated lyrics to Self Destruction at Rap Genius. There is no parental advisory for this song.

To read more about nonviolence in Hip-Hop read Bobby, Bruce & the Bronx: The Secrets of Hip-Hop Chess  on Amazon or Smashwords.
at July 21, 2017